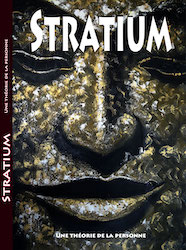 Abstract: Stratium is a theory based on the complex dimension of the brain. This includes on the one hand the horizontal complexion of neural groups processing signals of the same qualitative nature, on the other hand the vertical complexion of a new group overlapping the previous ones to synthesize a new qualitative symbolism. The conscious workspace, at the top, is the final integration. Stratium is also a theory of personality, organizing this hierarchy into a psychic society that accounts for our very varied behavioral phenotypes. The height of vertical complexion makes the thickness of consciousness. It is anchored in matter before the neuron. The phenomenon of consciousness is inscribed in reality per se. Each individualized entity experiences it in its own way, accessible only to a vertical complexion of the same order. Our consciousness self-recognizes only in itself.

The core of the theory

Stratium is a theory based on the complex dimension of the brain, both as a horizontal and vertical complexion. Horizontal, because the anatomical areas include neurons dedicated to major mental functions. Vertical because these areas build bridges between them and form a complex staging that culminates in the conscious workspace.

The increase in complexity occurs through the connections of neurons and their position in the network. It is modeled by graph theory. Each neuron can belong to one or more levels of complexity. This vertical complexion increases with the richness of the signals to be processed, as well as by the educated mimics. Evolved concepts or memes are transmitted from one congener to another… provided that the mental complexity of the recipient is sufficiently advanced to reproduce them.

At the top of the hierarchy is the global workspace, the activation of which forms the consciousness we experience. The recruitment of associated mental functions in this space is variable in extent and importance. This explains the “degrees” of attention and consciousness, from the vagueness surrounding the sleep to the acuity of wakefulness. The discharge of excitatory nuclei in the global space, added to the diurnal reinforcement of sensory signals, makes the transition from sleep to wakefulness. We are awakened by the nycthemeral cycle of excitatory nuclei, or by unusual nocturnal sensory signals.

The originality of Stratium is not in a classical neurological approach but as a psychological theory of personality associated with the neural. The stratification of the mind makes it possible to see a hierarchy, from sensory neurons of 1st rank to groups representing personas, —conceptual conglomerates that are the facets of our personality. Personas form a psychic assembly that produces different behavioral solutions in each context, with a sometimes abrupt and conflicting choice. This psychic society or Psociety accounts for our behaviors sometimes upset from one minute to the next without them becoming chaotic. We have changed of psychic paradigm; the Psociety has reconfigured itself.

The thickness of consciousness

In Stratium every depth of information added by one neural group about the others creates a layer of consciousness. Final consciousness is not related to mental functions that observe each other, as in theories based on neural re-entry—Global Workspace (Dehaene), Higher Order Consciousness (Rosenthal), Recurrent Process Theory (Lamme). Each mental function is already conscious, in its specific way. For example, we experience a pseudo-consciousness quite close to the integral during the dream, produced by the prefrontal cortex and its very rich predictive abstractions. But it is possible to make other types of infra-conscious, sensory-motor, memory, even digestive “dreams”. They do not really deserve the title of consciousness because the crude information they convey is not recognized as an experience similar to integral consciousness.

The depth of information created by each mental function makes its thickness of consciousness. Thus the consciousness of a sting on the skin is unsophisticated, loaded with an elementary sense. Whereas being aware of a sexually attractive person in your field of vision is loading yourself with much more elaborate impressions and scenarios, isn’t it? The thickness of the phenomenon suddenly increased. These thicknesses are surimposed. If the attractive person touches me, the skin signal is a completely different experience than the simple sting previously mentioned. The difference is not reduced to two types of mental information, as if a computer were processing two sets of data; it is an experiment whose depth has increased incredibly enormously, and only vertical neural complexion can account for it.

The explanation of the phenomenon of consciousness, in Stratium, is not based on the existence of neurons, especially not on neurons supposed to be specific to the conscious network. The origin is sought in the real itself, and that is why my previous articles have dwelt on its complex dimension. Consciousness is born at the interface of crossing a level of reality. These levels called emergences in matter are also the degrees of depth of neural networks. In terms of information, in terms of reality structure, they are exactly the same thing. Thus appears a continuity between material and virtual. Seen in its complex dimension, integral reality is a tiering of levels of information.

Consciousness thus starts, in its own way, in the material support of the mind long before it is described as neurons. The explanation of consciousness remains physicalist while honoring the philosophical vision: the phenomenon is not eliminated. On the contrary, it is rooted in the most microscopic foundations of matter, and thickens from there to the top of the unprecedented complex layering formed by neural networks. Nothing known is as conscious as our brain because nothing else reaches such a height of complexity. However, animal brains follow us closely, the best of them certainly higher in consciousness than the worst performing human brains, without the experiences being comparable, since they are specific to the nature of the aggregated mental functions.

Points to be clarified

There remains a debate to be resolved about the causal reality of emergence. On what is the relative independence between the two sides of the coin / the level of reality based ? This will be the subject of another series of articles. I will show that, just as there are two axes with a complex dimension, bottom-up causality and so-called ‘top-down’ causality are not of the same order. They are not competitors and opposing them is sterile. Talking about retrocausality does not call into question any scientific model. On the contrary, I will show how reality itself uses retrocausality, how it makes approximations about its own constitution. Thus comes the certainty that our mind, which does the same, is undoubtedly part of reality, and is perfectly integrated with it.

The next and final article in this series returns to its beginning: Nicholas Humphrey has received harsh and justified criticism for his theory of the phenomenon consciousness. Does Stratium do better? Let’s review the demands of our expert philosophers…