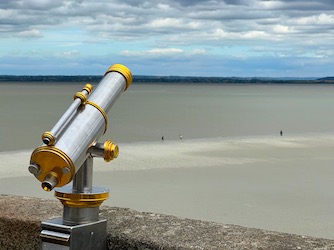 The Fermi paradox is the contradiction between two claims:
a) The number of stars and stable planetary systems is so large that life must be spread throughout the galaxy, including intelligent species with detectable artifacts.
b) There is no serious evidence of a visit to Earth by aliens, and no sign of their presence by analyzing the cosmos.

Denouncing the paradox by challenging assertion (b) takes us to a flowering of suspicious and conspiratorial arguments. Let’s stay in safer territory by discussing the statement (a), as Jean-Paul Delahaye does in Pour la Science.

Popular solutions to the paradox

The claim (a) seems more scientific. It is even based on an equation, that of Drake, a pioneer astronomer of the SETI program, which concludes that thousands of galactic civilizations exist potentially. You will find this equation at the end of the article. A simpler reasoning is enough to challenge us: the Milky Way was formed 13 billion years ago. The Earth gave birth to us after only 4.5 billion years. This leaves a lot of room for life that appeared earlier for colonizing the galaxy, or at least showing its presence.

The solutions to the paradox are grouped into 3 categories:
1) Life is very rare and we are really alone.
2) Life is widespread but never persists long enough to produce a sustainable advanced civilization capable of traveling the cosmos.
3) Civilizations do exist but are not interested in exploration, too expensive, or hide, for fear of encountering more aggressive than them, or the waves of exploration concern the dense regions of the galaxy and we are away from them.

With the universal method that you have learned to practice on this blog, the solutions are divided into 2 categories only:
1) Teleologicals, which suppose to put oneself in the place of the aliens and guess their projects. I also put here the religious beliefs, with a God who would have wanted us as a single species, as well as the hypothesis of simulation, where we would be the numerical creation of a very advanced species.
2) Ontologicals, which examine how the universe was formed, right down to our species, and the probabilities that the phenomenon will recur.

Teleological hypotheses have the advantage of making much better novels, by populating the galaxy with beings who resemble us, in addition enigmatic. The fear of having a bad encounter founds ‘The Dark Forest’, a SF novel by Liu Cixin. In the same vein are the hypotheses of probes and nanorobots spreading throughout the galaxy and making disappear, voluntarily or not, all life foreign to that of their creators.

The advantage of the good story fades in the face of a notable disadvantage: these assumptions place a lid on our destiny. Descending from the gazebo of a superior being and the reflections that are attributed to him, they seal our future. If aliens haven’t managed to colonize the galaxy for billions of years, we won’t do better. If they are hiding, we have an interest in doing so as well. If God wanted a single species or if we are simulated, how can we go against the will of the Great Programmer?

Teleological solutions start from an illusion: they assume that we can escape from our minds to analyze the destiny of the species. A bias maintains the illusion: our imaginations differ and in some congeners they are breathtaking, giving others the impression of truly extraterrestrial productions. They never are. It is the diverse efflorescence of a conceptual universe with common roots, born in the local terrestrial context. Imagining other ways of representing the cosmos implies going in the opposite direction: going back to these roots and looking for new conceptual trees. They are already contrasted according to human cultures, probably much stranger in other evolved land animals such as whales. And in alternative environments, with other information carriers than the biological brain? This one is a prisoner of its earthly roots.

For example, it finds it difficult to admit that aggressiveness is a necessary ferment of expansion and that we have not managed to get rid of its setbacks. We are a naturally conflictual, socially unstable species. Spike of complexity that can collapse at any time. But seeking stability by getting rid of aggressiveness is also slowing down our evolution, abandoning the desire to take control of the universe. An advanced and sustainable civilization is probably of an almost vegetal tranquility. No fear to go into the cosmos but no desire either. Is it an intelligent brain that seeks to escape from its planet or rather a pretentious brain? Will it remain so when the control of our destiny passes through that of emotions?

The ontological approach may seem simpler and more reliable, since it consists of starting from the micromechanisms of physics and looking at what they can produce in the galaxy. But there is no theory of complexity. From inert to living, the mechanisms are correlated rather than in continuity. Even for proponents of a computational theory of reality, it is impossible to know the outcome of algorithms without letting their immeasurable multitude unfold. It is therefore necessary to use intermediate models and transcendental principles, such as the theory of evolution.

This is the direction taken in ‘Extraterrestrial Life, a Guide for the Galactic Traveler‘, by Arik Kershenbaum, published in 2020. The author sees life as a series of emergences of ever higher levels of complexity. Judicious ontological direction that I will complete in a few moments. However, Kershenbaum is also trapped by teleology and suddenly lands in his book communicating alien humanoids. Back to the anthropocentric novel, probably more seller, but it is a shame to discredit the original position held until then.

What is complexity as a process?

Micromechanisms unfold and explore the multitude of their possible iterations. At certain points in the sequence their interactions loop. These islands of stability eventually set up higher interactions. A level of complexity is crossed. Its existence is limited by the permanence of its constitution. The strongest foundation of our universe is the stability of the atom, which ensures that of matter. By elevating its complexity, matter finds more fragile, metastable organizations, founding life.

The time between the installation and these “steps” of complexity is unpredictable. If the context conducive to a new organization is not met, no further elevation appears. Complexity is not a dimension that inevitably grows. It can collapse at any time, because one level of its constitution loses its stability. Let us imagine that the physical laws are not as unalterable as we postulate and that the proton loses its durability. All the matter in the universe would disappear to return to a soup of elementary particles.

A balance on the edge of chaos

The elevation of complexity depends on a delicate balance in the environment: it takes sufficient chaos for the elements to explore new interactions, without threatening their survival. The great diversity of parameters makes the great complexity. But this eventually lengthens the time after which stability will be found. Taking the example of our planet, progress in complexity is exponential. But this is not a regular exponential curve. Rather peaks of complexity followed by collapses, with overall a steady increase. A cosmic catastrophe could bring it back to its baseline, that is, inert matter.

Structuralist monism leads to representing reality in the form of levels of information, in continuity from inert matter, biological tissues, to the mental and societal levels formed by our brain (which are an elevation of complexity by the organization of our neural networks). The acute intelligences of humanity’s geniuses are notable peaks of complexity. Unfortunately often temporary as their organic supports. Most remain invisible. It is rare for genius to possess the tenacity to be recognized. From a positivist perspective, the history of knowledge is a succession of great discoveries. More objectively it is a succession of steps missed by brilliant ideas until they find a favorable context.

The Homo gender, resulting from a random genetic mutation and immediately provided with the biology necessary for his development, took 300,000 years to brutally raise his mental and social complexity. Without certainty that he will continue, because he has also created the possibility of his self-annihilation. He would then be just a fleeting arrow of complexity in galactic history. Time is a major parameter. Each level of complexity creates its own time. Perhaps those of other civilizations are so different that their history lasts only one of our days, or on the contrary ours is only a moment of their scale of perception?

The ontological, and also the least anthropocentric, conclusion of the Fermi paradox is that life is probably common in the galaxy (this is only a few steps of complexity additional to the chemistry of inert matter), but that it exceptionally reaches the complexity called ‘civilization’. As for undertaking a galactic expansion, it already presupposes a stable organization on a planetary scale. But this is far from being an inevitable evolution for intelligent beings. This goal seemed credible for the Earth at the end of the last century, after the great conflicts that bloodied it. But one generation passes, the next forgets and the human collective begins to decompose again.

The real Fermi paradox is undoubtedly that the linking of information destabilizes existing organizations. Thus, social networks, from which we could expect better planetary coordination, have in fact reinforced individualistic withdrawal, to the detriment of collectivist management. Homo sapiens, at war with its own hierarchy, is not done with the collapses of complexity and the chaos that accompanies them.

R* = number of stars that form each year in the Galaxy
fp = stars with planets
ne = average number of planets likely to host life per star
fl = share of those planets where life actually
appears fi = part of those planets where intelligent
life appears fe = part of those civilizations capable and willing to communicate
L = average lifespan of a civilization.

The Fermi Paradox: Reflections on Life Elsewhere… and on Earth, Pour la Science n°538, July 2022
The Fermi Paradox Is Not Fermi’s, and It Is Not a Paradox, 2016
The Zoologist’s Guide to the Galaxy. What Animals on Earth Reveal about Aliens – and Ourselves, Arik Kershenbaum 2020