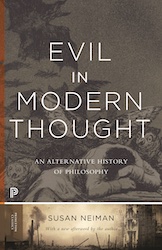 Thinking about evil is not just about burning yourself in it

With ‘Evil in modern thought‘, essayist Susan Neiman revisits Nietzsche and Arendt to condemn a resignation from contemporary philosophy about evil. She sees the Holocaust as such an exorbitant evil that it requires a complete overhaul of ethics, not just deconstructing world history. An seductive book, because it relieves us of guilt for belonging to the species that has inscribed such abominations in its History.

However, we will see that Neiman’s militancy is a blatant example of the exclusive downward look, the judgment, the one that wants to belittle and destroy the upward/constitutive look. In this sense, ‘Evil in modern thought’ contains a proselytism that is dangerous for ethical reflection.

Yet Susan Neiman knows how to use this upward look. Interviewed by Alexandre Lacroix about the spontaneity of evil and its irrationality, she comes to the rescue of our little daily wickedness: “We’ve all done this kind of thing, right? It’s a way of experiencing our power to act on the world.” Neiman acknowledges the existence of mental conflict, which she calls ‘antinomy‘, “a situation in which two contradictory statements are equally true. On the one hand, we must maintain that it is important to explain the evil, to know its causes. […] On the other hand, it is also true that, when we begin to explain the psychological, sociological or historical background of destructive behaviors, we make a less clear-cut, less severe judgment on them.“

And the tipping point comes right after: “I know that in France, you have this expression: ‘To explain is not to justify.’ Alas! I am afraid that is partly inaccurate. Not all explanations are created equal. Some are fine and help prevent future evil, others are massive and reduce us to impotence.” What did Neiman just do? She has just abruptly switched from explanation to judgment, pretending to always be in the explanation. Some causes are benign and others unacceptable. The downward look, intentional, took control. It has just ejected the upward, explanatory look, which sees evils born of natural causes, not yet moralized. No one is born with evil per se. And yet Neiman continues her speech as if she were adopting this premise. From one sentence to another she made a head to tail. Even the bright Alexandre Lacroix did not notice it. The rest of the interview takes on a different coloring.

Neiman will indeed break all the bottom-up, natural explanations of moral behavior, and replace them with her top-down intentions, moral judgments already installed in a tabernacle. She quotes Alfonso X, King of Castile: “If God had consulted me on the day of Creation, I would have given him some useful advice.” then she tackles the ontological sciences: “Evolutionary psychology reconnects with this belief in original sin, when it attributes selfish genes to us.”

But there is no morality to look for in genes. The upward look sees none. Unless we substitute for it the downward look and place a moral God at the origin of everything. Which is actually to deify one’s desire to see the world constituted in a certain way, and not to observe how the world is constituted.

In the same logic, Neiman contrasts Arendt’s amor mundi —the love of the world that engages us so that the forces of destruction do not prevail—with Nietzsche’s amor fati —the love of fate that finds it magnificent in the contrast between good and bad. For Neiman the amor mundi, which pushes for action, must replace the amor fati, passive in the face of horror. Why? Because the amor fati “in my opinion, no longer holds after Auschwitz“. But, Mrs. Neiman, why would it have held after Cain’s assassination of Abel? What gradation of horror do you use to eliminate one of the loves in favor of the other, when they are not incompatible? Is it not rather one of your eyes that you eliminate, the fatalistic one of the constitution of the world?

When the painter is not working

Fatalism is still a judgment of one look at the other. This term has no meaning for the upward look. Can you tell neurons that they are “fatalistic” when they send an electrochemical pulse? They process their data, weave their concepts, add layers of complexity. ‘Morality’ is a palette of colors that pours into the highest levels of this pyramid, long after the fundamental mental structure has been organized.

When the dedicated function encounters a malfunction, the painter does not work, and a psychopath bursts into the world. What other feeling than fatalism can arise from this understanding? How is this fatalism incompatible with the hatred born of the psychopath’s crimes? Neiman does not understand that the mental process is a treatment of conflicts, that human nature is fundamentally a conflict, that neurons do their best to resolve it, even when the result is aberrant. The aberration is more often in the data provided to them rather than in the mental structure itself.

Human nature is to get trapped

The most terrifying impression that comes from reading Neiman is that she was trapped by the same radical look that triggered the Holocaust, the horror to be mocked. Indeed, what is the cause of this monstrosity if not the exclusive downward look, the one that enacts good and evil in a Manichean way, that dissolves the side effects in the main effect?

Can we say that philosophizing is precisely to switch to a militant look, to direct the conflict and advance our ethics? Certainly. But at the same time, these looks, we must finally make them coincide. Philosophy is an alternative driver between individualization and fusion.

By collapsing the value of the constituent elements of evil, by enhancing that of pure judgment, Neiman wants to refound an unassailable ethic, like the one that the majority of Germans could not attack in their heads when its appalling mutation became evident.

By saying, “In the face of evil, the majority of people prefer to look elsewhere,” Neiman condemns an entire population, like people worse than her have done. It even condemns… Humanity in its intimate functioning. Evil would be a vice in the construction of the human. But it is only in a single, scandalized eye, which wants to subdue the entire genre.

For a spontaneous morality

Like Mrs. Neiman, “I” get upset when our peers don’t behave like “I” think they should. But of all the rules, morals have the least vocation to be imposed. They must be carried by each of us and when some does not, the others must question the context that prevented them from doing so. The collective is a retro-control; it must promote moral spontaneity before castigating its excesses. Morality is ascending, constitutive. Punishments descend when the drift is proven, “proven” meaning universally understood in the upward direction.

The worst excesses occurred when a single voice, an “I” with absolute intentions, indicated to others the direction to take, because it had created its scale of horrors, and a strong designate justified ignoring the others. What we must appropriate is not a given morality but our natural absence of morality.

From this absence, the direction to take, that of our ascent, we must find it together. All the deities are the ones we have invented, and it is by removing these ceilings, turning them into steps, that we move towards the true one.