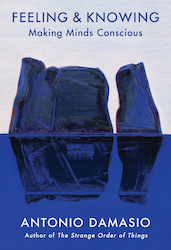 I grasped Antonio Damasio’s latest book with great excitement. Judge instead! In subtitle: “Making minds conscious“. What could be more enticing for the one who has been waiting for the explanation for a very long time, desperate to the point of having developed his own theory? I dive.

I soon become disillusioned. From the first chapters, I see that Damasio’s approach is biased, purely teleological. He begins by describing the progress of life, from the first unicellular to the appearance of the nervous system, without providing any explanation for this progression.

Like other teleologians (any connection with theologian is premeditated), Damasio uses the eternal shorthand “Nature has selected…” as the universal mechanism of the living. This is to forget that there are two inseparable drivers in evolution: mutation/selection. “Mutation” is a term still specific to the teleological view. It presupposes a disruption of a well-oiled mechanism. Not at all. It is the imperturbable march of self-organization, which explores the infinite diversity of its solutions, and temporarily stops on metastable states. To speak of an “accidental” mutation is to ignore their fundamental character. Life is a collection of mutations that are organized.

What balance is sought by Nature?

Nature does not seek to maintain its balances, as Damasio thinks. That would be to deify it, to make it a will superior to ours. Such a voluntarist entity is not part of the physical principles identified in the universe. It is the result. The Divine Nature is at the end and not at the beginning of the causal chain, science tells us. This does not preclude reverse causality. But these two causalities are not simultaneous, which would cancel out the very meaning of the word. They are exercised in different time frames.

This immediately reveals the limits of Damasio’s work. Yet he is off to a good start, warning that consciousness cannot be defined exclusively in neurons. But it stalls just a little further, simply associating body sensitivity with the central processing of this information. Let’s add it to knowledge, show the opposition between perception and representation, and here it is!

What exists is, but has he explained himself?

It’s disappointing, Antonio. Certainly for your teleological look, feeling and knowing are two different functions. But ontologically these are only similar electrochemical excitations. Why would they produce the phenomenon of consciousness in some neurons and not in others? Why is a computer not conscious when its electronic routines perceive and interpret, like the brain?

Ancestor and not parasitic viruses

Damasio’s unique look does not allow him to understand viruses. In Chapter 3, ‘Viruses, These Puzzles’, he writes: “Viruses are not living organisms … Viruses have no metabolic energy, unlike bacteria […] Viruses cannot initiate movements […] Viruses are not alive but can parasitize the living and acquire pseudo-life. In doing so they often destroy the life of their host.”

With the ontological counter-look, here is the same story: “The principle of metabolic energy has not come out of nothing. Before it there were entities that did not have one. Which were content to use physical flows to move and interact. Which came together in synergistic elements. Until the moment when this synergy deserved the term metabolic energy. Viruses are therefore the ancestors of bacteria, contemporaries of fungus, and descendants of micelles and self-replicating molecules.”

The direction of history

It is in this direction that history is written, from the initial chemical conditions, and not from the result (an intentional mind in an autonomous body) that rewrites history so that it corresponds to it. Unfortunately no, in many other places, less agitated than our planet, the same chemical soup does not produce anything “alive”. If God made the universe for us to appear in, He got very tired unnecessarily for this tiny occupancy…

‘Feeling and knowing’ is meant to be enjoyable. It’s nice to read that “we offer shelter and cover [to bacteria] in exchange for some valuable chemical services” rather than “our cells are colonies of ancient bacteria regimented by a common genetic code, still harboring wild bacteria within the organism they built.” The deified human appears in the first formulation, is totally absent from the second.

Already all fed up with the loss of our celestial ancestry with the retreat of religions, the pill is even more bitter. You no longer descend from monkeys, gentlemen-ladies, it’s worse! You have become a jam of clumped microbes! Certainly the packaging is pretty. Especially after a day of shopping. But don’t take off your skin please! I’m not sure I’ll appreciate you so much in layers… biological.

The trap of the homunculus

The escalation continues for Damasio. The mind appears above the nervous system, always without explanation. “We, the owners of [mental] schemas, can cut them into pieces, and rearrange these pieces in a thousand and one ways to form new patterns.” This is the conceptual error called in philosophy ‘recourse to the homunculus’. Who cuts, who rearranges? Where is this homunculus at the controls of the mind? No, Antonio, our mind is that process. That it models itself does not make it a programmer at the controls of its own mechanism. We do not “decide” to send impulses to one area of the brain or another.

The worst passage of ‘Feeling and Knowing’ is chapter 7, where Damasio wants to fill his ontological void by fishing for the hypothesis of quantum consciousness. The package is balanced as follows: “The work of […] Penrose Hameroff Neven indicate that quantum-level processes that take place inside cells, and more specifically neurons, play an important role in the world of mental states.” Do you detect the slightest hint of explanation? In a phenomenon that is not even exclusive to neurons? The presentation does not honor the authors, it’s true. Their theory is more argued and justifies a dedicated criticism. But why does Damasio throw it in his book as an apparition of the Virgin Mary?

What about consciousness, then?

Damasio describes consciousness as a “special state of mind.” Unfortunately ‘state of mind’ is not explained as a phenomenon. Consciousness is presupposed in its description. And especially reserved for human feeling.

Why does Damasio refuse to investigate consciousness in matter and the non-living? Because what he is looking for is human consciousness. Specifically human. Its extraordinary quality makes it impossible to decompose it, to compare it, to link it to material phenomena. Still the blinders of the exclusive teleological look.

This mistake costs him dearly. While he is on the right track in implanting consciousness in bodily sensations, he gets lost when he makes it a necessary and sufficient condition. The “hard problem” of consciousness is in no way solved. For example, he denies it to a person who is the victim of a locked-in syndrome. No connection with bodily sensations. Yet by bypassing the communication problem it turns out that the person is well conscious.

A prisoner of horizontal thinking, Damasio sees the integration of mental content as a single system. If he had read Stratium, the chapter of Surimposium devoted to the mind, he would see it as a hierarchy thickening the mental contents to the particularly rich experience of the summit. So is ‘Feeling and knowing’ valuable as a demonstration of errors that prevent us from understanding consciousness?

Let’s end on a less harsh note, with deserved congratulations for Antonio Damasio. On the one hand, its title underlines a perfectly right opposition: to feel is not to know. But these are not two neural functions different in their sophistication, archaic ‘feel’ and evolved ‘knowledge’. These are the two directions of a unique process of data organization, present even in the absence of a nervous system, which makes it possible to free consciousness from human neurons and define it in plants or primitive organisms.

On the other hand, Damasio rightly discerns the origin of feelings in the body. It details the close relationship with homeostasis, even in the non-myelination of visceral axons, which makes them sensitive to local biochemistry rather than making them mere pulse transmitters. Damasio understands the origin of consciousness in feelings and behind them, the body. He understands it, but does not explain it.

Let’s add the ontological look at feelings. What synergy exists in the association of an organism with neurons encoding information? They evaluate the results of different reactions, previously mediated without nerve intervention, on homeostasis. The evaluation, which oscillates between ‘everything is bad’ and ‘everything is fine’, is the basis of the first feeling. Their qualities will then diversify and the search for ‘everything is fine’ will form the circuits of reward. The mind is the organization, in layers of increasing sophistication, of the conditions under which this ‘everything is fine’ can be predicted and achieved. Feeling is at the root of this complexity.

Finally, Damasio perfectly grasped the opposition between intrinsic and extrinsic sensoriality. The body and the external senses construct two images alien to each other: self and non-self. This is the foundation of mental identity. An ‘I’ appears in the brain, distinct from the rest of the world. Obvious when we experience it. But how do these representations group into opposite poles in the brain? Remember that the so-called ‘real’ world is inside our minds, not outside. Only the data is outside, not its interpretation. Not the experienced real world. There is therefore cohabitation, in the same neural space, between the self-body and the rest of the universe. Whew! One hundred billion neurons is not that huge for such a volume of data, and they do not mix!

An explanation of the ‘I’

Damasio’s book is therefore an excellent analysis of the formation of the ‘I’ and not a new theory of consciousness. Consciousness is a phenomenon whose explanation must be sought much further than a perceptual body, if we want to avoid reducing it. Let us seek it in the very organization of reality, of which we are a product. Let us associate the ontological look with Damasio’s teleological.

Neither of them can understand each other in isolation. Everyone builds their origin from nothing, simply saying “I am”. In Damasio, this base arising from nothingness takes the form of the homunculus, who rearranges thoughts, experiences feelings. It is also “the organism that seeks to maintain its homeostasis”. The use of several different starting points, all taken out of the hat, should question teleologians about the mystery that is the bottom of this hat.

The isolated ontological look does not do better

Ontologists are not left out. Their own basis, just as sudden, consists of fundamental laws and forces, supposedly derived from reality per se, but in fact born directly from their minds. Each look thus puts its mask on things, one on their representative face, the other on their constituent face.

We don’t yet know what things are in essence, but going around them is better than looking at half of them.

My fireplace blazes, but has a bad circulation

The most discouraging thing for me is that Damasio would probably not understand, despite these explanations, why I see his book as fundamentally truncated. It’s not a question of knowledge (he probably has more than me) but of a more relevant thought structure. And I am a little sorry that Surimposium, which achieves the completeness sought, has a circulation infinitely lower than ‘Feeling and knowing’. If God was a little lazy, to change, he would have printed only my book 🙂