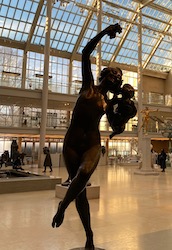 Feminism: learning to do without the symbolic

In the feminist struggle, positive discrimination has a symbolic role. Essential role at the beginning. It intervenes in a society frozen in its socio-cultural glue. Men and women have a predetermined place in it. Awakened consciences alert others to gradually back control their habits. They will never fully achieve this in the current generation. Because these habits are the basis of insurance for a majority of people, including women.

Touching such deep foundations threatens the entire balance of the personality. It’s not just about changing laundry brand, or accepting that your preferred political candidate has failed. The determinism of sex settled in the earliest childhood, built unconscious cogs inaccessible to the adult personality.

Easy for the intellectual feminist to urge others to change. Without a notion of the complex depth of the brain, she may believe that it is easier to control a primary instinct than to construct a higher egalitarian concept. It’s the opposite! The feminist has no effort to make on her own foundations. On the contrary, she abandons herself to her aggressiveness, for a cause that she considers ‘just’, caught in an ascending, irresistible ethical whirlwind!

Targeting the young, not the old libidinous of the macho museum

Which priority population should be targeted to change mentalities? Young people, of course. Symbolism serves to mobilize major social structures, first and foremost education. Parents are old-fashioned? Children are not constantly with them. Discover the debate at school. When masculine flaws are explained rather than demonized, the result fits smoothly, as the nature of things. This generation will be inherently egalitarian, without the need to arm a symbol.

Too far away for activists. Who radicalize their action. Which awaken an aggressive male wokism competing with theirs. One-upmanship. At the heart of the discord? Positive discrimination is not meant to drag on. It ends up reinforcing an inferior image of the woman, too fragile to cope. Feeds a new misogyny.

The ‘Emir of Oil’ syndrome

Yet that is what is happening today. Positive discrimination is becoming part of the way of life. Is set in stone, through specific laws. Now sends a contradictory message to its original purpose. The obsolete “a man has superior rights” sees ‘man’ replaced by ‘woman’. Instead of being thrown in the trash.

The signal given to young women is not “Your chances are the same”, but “You are a woman, no one should stand in your way”. It is the Emir of Oil syndrome that is currently perverting feminism. Because I was born a woman, I am entitled to special consideration.

The second psychosis of militant feminism: the Colonial Debt syndrome. The female territory having been colonized by men for a few millennia, men as a whole are now carrying a flow that will take generations to repay. A boy is born with his backwardness written in his genes. Yet society has already radically transformed.

Hesitant to convince yourself? Watch any film from the past century. Until the 80s, the image of the woman they convey seems hallucinating today. Yet men continue to pay for their elders. Justice listens to them with exacerbated mistrust, lends a benevolent ear to women. Physical violence has a justified weight but psychologicals do not. Men at fault for the former, women for the latter.

The court, it is true, is the last place where symbolism eventually fades. A complaint is never dealt with in the present but in the past. Past that has long wrongfully benefited men. Which today unduly benefits women.

Do not see in this diatribe any revanchist spirit. On the contrary, the pragmatist in me worries about the lack of integration of feminist values. If it becomes sectarian Wokism, feminism loses any chance of blending into our universal principles. Its war will become perpetual, clan of female machos in conflict with the masculine.

To convince yourself, look at the success of a Zemmour, a convinced french misogynist, in 2022. His detractors reinforce him because they exhaust him in a summary way. Even an enlightened psychologist such as Nicolas Gauvrit writes nonsense, taking up a rudimentary feminist discourse. Zemmour justifies male impulses by declaring them ‘natural’. Provocative he writes: “Before feminism, a young bus driver [could] slip a concupiscent hand over a charming female buttock [without] the young woman filing a complaint of sexual harassment.”

Harassment? Or rather aggression from the point of view of the young woman. Not for the young driver. Disagreement between the two, inevitable conflict. Necessary. The young woman responds with a counter-aggression: the complaint. Is it of the same order? Not. She begs for the support of the collective instead of her personal strength. At this point, at this level of banality, it is disproportionate. A good slap followed by a vigorous rant is the right reaction. “I am as master and free of my individual actions as you are!”. While the complaint constitutes acceptance of the status of victim. We are far from the egalitarian position and this maintains the cliché of female weakness.

Obviously, the young woman takes risks if she reacts physically. Each context deserves weighting. In the one described by Zemmour, the driver put back in his place would not have reoffended. This is how young men used to educate their natural aggressiveness. But what if the aggressor beats the woman because she refuses to let it happen? Stop there!! The transgression is proven. Appeal to the collective fully justified. If it has not already intervened through the other passengers jumping to the rescue of the young woman.

Punishment, when the limit is crossed, never has the necessary severity. Zemmourist judges? Rather civil servants, anesthetized by the multitude of incivilities. They reinforce the sense of impunity among men, suggesting that the escalation of the conflict does not lead to a worse escalation of punishment. Clearly judges are not helping women to react as they should. That is, to manage small conflicts alone. Because men would know the major troubles that await them in case of serious drift.

But I said earlier that men are subject to a manifestly exacerbated mistrust. So justice, too severe or not enough?

The example of the bus is very different from a couple who tear themselves apart, with shared wrongs. The hand on the buttocks of a stranger is an insult to the general image of the woman. Everyone present is concerned. In a normal society, the driver who continues his assault after a deserved slap should be beaten by all passengers. More efficient than justice and less work for it… when we understand that it is everyone’s business.

Feminism is not just about collective mobilization. It is rooted in the individual belief that a woman has the same power as a man, and therefore exercise that power in the same circumstances as a man. This means reacting personally, countering aggression.

Zemmour does not explicitly write that the ‘natural’ allows man to surrender to it. It is Daussy and Gauvrit, his contempters, who make him say it. But we can actually assume that many young men will understand it that way. Why are they seduced by such a reductive discourse? Can we believe them flattered to be compared to unruly monkeys?

Zemmour’s preaching can only be anchored in a brooding male wokism, ignited by the excesses of feminism. Unwittingly, Daussy and Gauvrit participate in creating new symbols for machismo and exhuming it from its ashes. These young men experience themselves in a situation of injustice. The society did not declare that aggressiveness was in itself a fatal defect. On the contrary, it encourages it in social competition. Men compete with each other. The losers accept their situation when they have been able to participate in the match. But positive discrimination is a game changer. There are now women’s passes. Inevitable resentment against a culture that sends out contradictory messages.

Life, a nursery of conflict, perpetually exposes it to wounds. Being a woman is not a disease. Why a balm specific to this state? The Scandinavians, authors of successful gender integration, do not need it. They have never, in fact, resorted to positive discrimination. To meditate.

Zemmour, champion of naturalistic fallacy, Brain & Psycho n°141, March 2022
Zemmour, misogynist and proud to be so