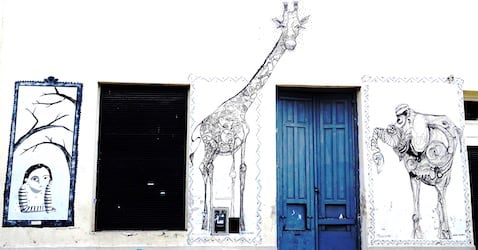 At the pediment of the Academy

Love of wisdom, science of knowledge, questioning of the nature of Man, blessed energy (Epicurus), system of knowledge (Kant), astonishment in the world (Schopenhauer), intelligence of reality (Hegel)… Definitions of philosophy are imbued with the personality of their authors. To the point of making it the place where one keeps one’s inner demons (Marcus Aurelius, Husserl). Or a rebellion: Philosophy is none of the natural sciences (Wittgenstein), is not the construction of an afterlife that would be God knows where (Hegel).

This garden of personal flowers is dominated by two trees, the best representatives of philosophy in its completeness, from roots to blooms. The first is by Descartes: “Philosophy is like a tree, whose roots are metaphysics, the trunk is physics, and the branches that come out of it are all the other sciences, medicine, mechanics and morality.”

The second is by Heidegger: “There are numbers, there are triangles, there are Rembrandt paintings, there are submarines; I say there is rain again today, there will be roast veal tomorrow… This simple “there is”, all flat and, so to speak, emptied of determined meanings, conceals because of its simplicity, multiple enigmas“.

Model pairing with thought per se

These authors escape from ‘disciplinary’ philosophy to take an interest in its complex dimension, a tree structure in Descartes, traced back to the origin of questioning in Heidegger, which starts from the “absolute sympathy for life”.

Let us then define philosophy as the model of our intimate structure of thought. A complex model that starts from the elementary activities of the mind (representing the world to bring it into itself) to the most sophisticated (inventing every conceivable angle of view to situate an abstraction). Neural diagrams that specify objects to those who blur concepts. Philosophy is twin to thought, as its model..

Philosophy is indeed a science, because it models, and yet it derogates from the principle of science, which must have an external eye to be refuted. The pitfall of circular reasoning, the trap of fragmentary knowledge, is an inherent feature of philosophy as a whole. The pitfall is also modeled, within philosophy from which nothing can escape, by definition, since it is all thought.

On this tree, model of thought, you can now hang all the previous definitions. Let us place ‘sympathy for life’ at the bottom, at birth, when our eyes open for the first time. Neural networks are beginning to philosophize to find meaning in this information, from a simple pre-programming.

Baobaba in front of the philo!

An immediate and major step is socialization. Mimicry on meaning. Then education: on ways to find it. The trunk widens like a baobab. With education also begins academicism. The branches of knowledge are dividing.

First big separation on the trunk: science. A label is placed there by philosophers of science. For them the definition of philosophy is the rest of the trunk, which is not science. I quote Rosenberg and McIntyre: “Philosophy deals with two sets of questions: 1) Questions that science cannot answer today and perhaps never. 2) Questions about why science cannot answer the set (1)“.

What about the ethology of atoms?

Don’t keep dividing philosophy between its different disciplines, like a wiki does. Juxtaposition that does not account for its vertical dimension. In a verticality there are first 2 directions of the look, base to top (ontology), top to base (epistemology, teleology).

There are then 2 experiences, that of the top (phenomenology, aesthetics, experiencing the moment) and that of the base: unfortunately we do not share any impression with the atoms, so that the too rare data have not allowed the emergence of a new discipline! But animal ethology is a primer in this direction, when it strives to guess what animals are experiencing. Is it possible to escape from our own experiences? I am afraid that the first ethologists of atoms will shut down the nuclear accelerators, where innocent guinea pigs are brutally murdered.

We, between one and the multiple

The philosophical tree is not smooth, it has eyes, forks, perches, is traversed by different saps, and 7 billion ants that delight in tasting them. It contains vast niches (politics, religion, justice), workshops to dismantle (logic), paint (history, arts), communicate (language), transform (philosophy of action, morality).

As for science, let us not isolate it. They are the languages we invent so that the world can speak to us. Very close to it, but still in our ways of philosophizing.

This complexity of the model makes it possible to understand that there are as many copies as there are minds. Philosophy is also the relationship between the one and the multiple. Philosophy is us. Can we do less elitist?