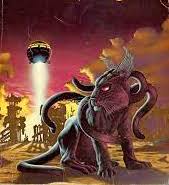 A nexialist is a specialist in transdisciplinarity. A non-specialist in fact. His knowledge has no borders. On the contrary, he must explore all areas, without trying to push his expertise in any. This extra time would be missing from his other explorations. And it usually arrives in less safe terrain.

The nexialist invents bridges. His own expertise lies there. He is a specialist in complexity, the cross-referencing of models and languages. It is not only multidisciplinary but achieves the fusion between the different pieces of the puzzle of reality. His conception of holism is the only authentic one. Instead of relying on any spiritual belief, his metaphysics starts from the bond, his divinity is coherence. Nothing is excluded from the whole to be structured.

But the place given to the elements is not predetermined, as in religion or in science cloistered in its founding principles. The elements self-determine how they are organized. The nexialist attends the operation. It is responsible for integrating these independent processes. He looks for differences rather than similarities. The important thing is to identify discontinuities, the place where the paradigm changes, where the model becomes ineffective.

The term ‘nexialism’ was coined by a precursor, sf writer A.E. Van Vogt, who recounted the adventures of the first nexialist in The Voyage of the Space Beagle. The Space Beagle is a gigantic spationef that goes to explore the galaxy and encounters unexpected alien intelligences, mostly hostile. The crew includes a slew of specialized scientists, plus Elliott Grosvenor, representing a new science called ‘nexialism’, which encompasses all the others. Grosvenor’s teammates are mocking and suspicious. But faced with the complex dangers encountered by the ship, political and scientific revolutions took place on board, under the impetus of Grosvenor.