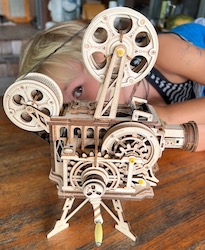 Persuade or manipulate, a clear border

To persuade is to give the individual ownership of his actions. To manipulate is to steal it from him. Today the border is erased by mass manipulation, which makes it possible to ignore persuasion. Why waste time making a consciousness think about the right action to take when it is enough to act directly on its cogs? Consciousness requires a specific, slow and uncertain persuasion. While its cogs are universal and easy to model. Their intelligence does not exceed that of algorithms.

On a daily basis, social media algorithms transform our unconscious mechanisms into steadies little robots, well aligned with others. A mass conformization invisible to consciousnesses that, plunged into a swirling ocean of events and kaleidoscopic incentives, still believe themselves diversified. The variety of information conceals from consciousnesses their growing similarity to deal with it.

The greatest mass manipulation tool of all time

Numbers: Facebook is able to predict the behavior of 8 million users every second, and unknowingly influence the attitudes of 3 billion people1‘Masters of Manipulation – A Century of Mass Persuasion’, David Colon, 2021, making it the greatest mass manipulation tool of all time. Just as a Putin alone decides the fate of 144 million Russians, a Zuckerberg alone decides the manipulation techniques applied to 3 billion people.

Can we situate the ‘nudge’ between persuasion and manipulation? This tiny push encourages people to do what is expected of them, without formally forcing them to do so. Drawing circles on the floor of stations encourages to respect distancing. No, the nudge is not halfway; it belongs to the manipulation. Certainly softer, only incentive, but always hidden from the target. The paternalistic side in the nudge does not change anything. The discreet push says nothing about its ethics. The goal belongs to the creator of the nudge and not to the one who go through it.

Does the problem of manipulation then become that of the ethics of the manipulator? Concluding in this way does not facilitate a solution. The management of manipulations becomes as complex as that of persuasions. Any nudgor or manipulator should honestly expose their links of interest. Good luck!

There is a more interesting approach. We have defined, at the heart of the problem, an observer: consciousness. It is consciousness that transmutes the odious manipulation into admirable persuasion. How does it do it? It aggregates additional data, contrary opinions. Debate too rarely sits in consciousness, but it sits only there. The essential role of this owner observer is to ensure that certain information is not prevented from entering.

Persuasion is not to conceal contradictory facts with those who must react. It is to facilitate the weighing of all these related facts, and to free oneself from their contradictory tensions. Get out of the status quo. The body spares its glucose, which makes the mind thrifty, and the mind lazy, clinging to its inexpensive habits. To persuade is to amplify discordances, to reveal that the current conformism of thought stifles a better solution.

The influence is proven but is made from consciousness to consciousness; from one complex identity to another. Persuasion is fair. Social relationships are made up only of influences. The mind seeks them spontaneously, to make mimicry. Influence exists behind each word, which does not correspond exactly to the same mental patterns from one person to another, which arbitrarily merges them.

The manipulation is not fair. The complex level of the manipulator takes control of a crude level of the manipulated. The consciousness of the manipulated, who would have its say, is not summoned. All drifts are possible. Need for a framework that is now in its infancy. We worry about the dangers of artificial intelligences while we ourselves, modified in our small internal psychic robots, are potentially even more dangerous, capable of triggering a planetary disaster.

Would the fiddling of our unconscious be completely devoid of justification, to the point that it should be prohibited? Certainly not. What would become of us without our well-established routines, our refined reflexes? Think of what you would give to improve them further, to acquire without fatigue new unconscious expertise.

At the helm of the past unconscious, not the future

Consciousness, this is its role, must sort through the manipulations that its unconscious can undergo. It wants to quit smoking or lose weight? It welcomes with open neurons all the nudges who can contribute to it. It wants a new car? OK for manipulations that improve technical knowledge and financial management skills, not those that send it into the nets of a skilled salesman.

The rule, for these choices, is that complex thinking influences the least complex, within the same mind. Retro-control of its constitution, which is a reflection of the past. On the other hand, it is not wise for consciousness to program its future choices. It restricts the future of a thought that would otherwise be more evolved and better informed. Let us care about our future self. Let us not put chains on it today. Thus it would be dramatic to let in manipulations as to the choice of profession, the political candidate, the companion or friends.