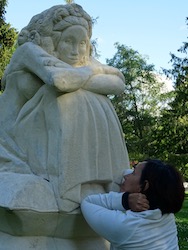 The Gaia hypothesis, Earth as a living organism, dates back to the 70s (proposed by chemist James Lovelock and microbiologist Lynn Margulis). Initially treated as New Age delirium, Gaia eventually found scientific credit, as a vast system of interconnected lives. The natural sciences today are deeply imbued with this concept. But is a system of lives enough to define a life per se?

The name Gaia has lost its favor. Partly because radical mystical and ecological groups have seized on it to make it a tutelary deity. Partly because Lovelock has become a controversial figure, as Sébastien Dutreuil explains in Pour la Science, an “independent” scientist who has worked for multiple industrialists and got against ecological causes such as the reduction of CFCs to preserve the ozone layer.

The name matters less than the underlying concept. What differentiates ‘Gaia’ from ‘Nature’? Is it just a collection of living processes spread across the planet or is the title of organism deserved?

Let us agree on the definition of “organism”. First ‘combination of the elements forming a living being’, the definition was extended by analogy to ‘any set of well-structured elements’. We thus speak of mental, social, literary organism etc. The term is therefore attached to that of “organization”, with an addition more difficult to define, “living being”, which we will see in a moment.

Let’s start with “organization.” An organism is a set of interconnected processes. Not all together. The human body appears as a vast mess rather than a beautiful clock. You have to look in the details to detect clocks. Individualize them in a particular system. Finding the organization of the body is about separating levels of complexity.

We intuitively separate these levels by a scale of size. Organs, cells, organelles, molecules are observed at very different magnifications. But they are not in different locations. It is an interweaving. ‘Cell’ is synonymous with a set of organelles in an intramembrane medium.

Is it just that? It is not just any of these sets, only those that retain specific properties. Its function is an additional, stable information, present only in the whole. No additional location. The location is the same, it is the spatial framework that has changed scale. This change of framework takes place in a new dimension: that of complexity.

Entering the complex dimension is a specific knowledge. To own it you must read the dedicated fundamental article. In one sentence: complexity modulates the spatio-temporal framework and divides it into levels with specific rules. These levels base the qualities on top of the quantities of micromechanisms.

The same article addresses in 2nd part the principle of life. It makes it a principle that takes consistency and thickens as levels of complexity are added to the living entity. Molecular, organic, and then mental levels when the entity acquires the exceptional cells that are neurons.

The complex entities that we are, mind straddling the body in this dimension, can only be formed from integrated information, added layer after layer, biological and then mental, increasing life force and then intelligence. The best of us are the most complex entities on the planet.

After this reading you can conclude on your own, without hesitation, that Gaia is not an organism per se, even if it is a whole containing a multitude of lives. A collection of living entities does not always constitute a new organism. Not if their information is not integrated.

Confusion between the mental universe and reality

The false impressions about Gaia come from the mistakes we already make about our own mental content. Sharing memes with our congeners gives the impression of forming a whole with them. This whole exists, but within our mental universe, not in the outside world. A community of thought is based on the recognition of each of the same ideas in the others. It does not exist outside of these mimicry, these mirror neurons.

The non-integration of information is easily demonstrated: move to Mars, your ideas remain. They do not disappear as soon as you are separated from your congeners. When information is integrated this is the case. The whole cannot survive without each of its parts.

Community is the community of the environment

Gaia includes a multitude of integrated entities but this does not make it an organism, despite the interconnection of living systems. The community of life on Earth is a community of environmental conditions, that is, the basis of the complexity of life, not its peak. If there was a summit organized in Gaia, it would have come to kick our butts for a while, to prevent us from rotting its bowels. But no, it is neither a goddess nor a “victim”, a term that transfers to it an emotion that is actually ours. Gaia is us, it is our biological constitution. It is we who must be protected by preserving the environment and not any intermediate ghost.

With the mind added to the biological, we are highly complex entities than Gaia. Gaia’s own peak of complexity is held in local ecosystems, which are integrations of physical rules. But each animal that inhabits them is already a higher complexity. The human, assisted by their sophisticated society, form the most remarkable peaks of complexity, especially when they manages to structure their mind in such a way as to integrate (and not eliminate) all its contradictions.

Gaia is the chain of our personal peaks

Our successes are mixed. Humanity is a chain of peaks, all of different heights and aiming to many points of interest. That’s why my proprietary concept on Gaia, like yours, cannot assemble and merge with those of our congeners. Is Gaia not an organism? Its simulation could be. Each of us could host a similar copy, integrating the multitude of environmental criteria that compose it. This requires to really take an interest in it, in the details, and not to swallow a simple holistic image.

Creating a representation of Gaia requires a lot of work and close collaboration. The exact simulation can only be built from small ‘organs’ of Gaia, patiently assembled within scientific disciplines, then with the intervention of nexialists, multidisciplinary integrators. Simulation is, as it describes, the pinnacle of a complex organization.

Above all, this is what we must mimic in our minds, rather than each building our personal image of Gaia, through fragmentary knowledge, dreams and religious ties. If Gaia is not an organism, only its common simulation can allow it to exist as an autonomous entity. The requirement is to rally to it, and therefore delegate our power of representation to those who work on the most faithful synthesis.

To save Gaia is not to believe in it, it is to elect its most realistic image, to find the best photographer, to throw away our own shots doctored by hidden interests. To give power to Gaia is to transfer it to the instance that best reflects its essence, regardless of whether this essence is not an organism. We are just as attached to our home.