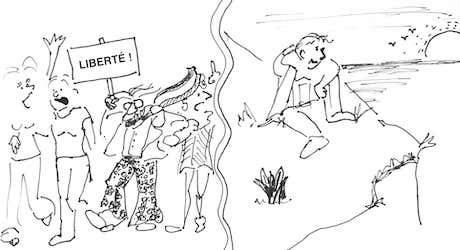 What is a non-binary?

A person who refuses to declare herself in a sexual gender according to the classic female-male binarism is non-binary. In accordance with this philosophy, she should choose a neutral name, or let her relatives use a feminine or masculine declination at leisure. The person can answer for example Theo or Thea, or the neutral Thee. This is the true definition of non-binarism, which is to free oneself from any social influence on one’s sexual identity.

Some go further. They do not just filter the influence but want to cut themselves off from the social relationship. Motive? Avoid any judgment on one’s preference, rarely as neutral as displayed. It is not so easy to protect oneself from the omnipresent binarism. Theo will ask that he be called Thea, without having changed morphological sex, and thus judge himself non-binary. But to adopt both sides of binarism, is it really to free oneself from it?

What is the purpose of a name?

Choosing a name is not a strictly personal matter. The name is used for the relationship. The relationship binds me with others. My given name binds me with my parents. My chosen name is a message to others. It is even the most obligatory and widely disseminated message in society. Choosing Thea when you were born Theo is saying “I don’t have a color preference” and dressing every day in bright red.

Identity discussions run into a constant problem: some identities are behind high walls and know only one direction of thought: “I look at the world”. The world is a place of severe litigation for alternative genres. Difficult to project oneself into it. The other direction of thought, “The world is watching me,” is impossible. From behind the wall it is perfectly acceptable to dress in red and say without preference of color. No one is there to challenge it.

Some alternative gendered people are more angry with binarism. They faced the ostracism of parents, relatives, conservative society in general. Heterosexuality is felt as an army that perpetually camps behind the walls, preventing people from living freely. These people are not just non-binary, but anti-binary. In this struggle they come together and reinforce each other. This is LGBT communitarianism.

The acronym has expanded to LGBTQQI2SAA+, + means “and the others”, see at the end of the article the details of the letters. Should this be seen as a relaxation or the recruitment of additional battalions? Communitarianism has the double effect of protecting and further widening the gap between classical heteros and other genres. It brings together more the rebels than the mediators, who dwell less on the difficulties in exercising one’s preferences within the general population. Life in society is, by definition, a difficulty in exercising all one’s preferences.

Can we really go to war against people for whom heterosexuality is as natural an instinct as walking or eating? The human being is complex and her sexuality is a layering of organizations from her genetic sex to her cultural environment, through primary metabolic and psychological stages that are hidden from her.

For the hetero the path is a straight line. Each staircase starts well in front of the previous one, from one floor to another. No need to think. The hetero adult leads to the roof adorned with the expected sexual morphology, the appropriate body language, the clothing mimicry specific to her sex. Before saying that culture has shaped her in this way, we must remember that culture does not arise from nothingness. It reflects and consolidates natural determinants. It is the dominance of heterosexuality in genetics that has been transposed into culture. The vast majority of humans end up on the roof as heterosexuals, that’s a fact.

The path has been much less straight for LGBT people. On some floors she did not take the usual staircase. The cause can be an unexpected, emotionally powerful event, aggression of oneself or a loved one; or continuous pressure from off-average metabolism, or parents desiring a child of the other sex, etc. Binarism then becomes a symbol of aggression rather than naturalness. It’s dismissed.

LGBT identity is less easy to explain than heterosexual identity. Less easy to appropriate one’s gender. Before being in conflict with society one is more in conflict with oneself. An unbearable character of the hetero is her confidence to be what she is and make it a norm, a more difficult task for the LGBT. Hetero and LGBT know their preferences, which they experience live. But the hetero also knows their origin, without needing to think about it. It shows the stairwell upright. From above you can see perfectly the XX or the XY at the very bottom. The LGBT cannot explain her identity so clearly, and often does not want to do so because it would make her go through chaotic floors, which she prefers to forget.

Tracing the ontology of gender

Let us call this path the ontology of gender. It is fluid in some, obscure or upset in others. Gender-based disorders are problems of appropriation of one’s identity. Rather than shortening it to a proven sexual preference, it is better to unroll it, to spread out all the paths it could have taken. It is quite easy for us to imagine what our life would have been like if we had preferred one companion to another. Similarly, we can reflect on the identity that we could have had in the absence of this person or event, whose influence was decisive. Would it have been more classic, easier to assume, more boring too?

Reflection is not intended to question our choices. Changing companionship is already not easy, so changing gender… The hetero who ostracizes an LGBT person should question her reaction if she were forced to have a sexuality that she disapproves of. Installed in childhood the genre has become inaccessible. It structured our whole personality. Impossible to change it with the simple retro-control that is actually consciousness. This consciousness will already be able to congratulate itself warmly if it manages to correct the neuroses accompanying this choice, the conflicts related to its partial acceptance.

Anti-binarism is an upside-down ostracism

To reflect is to be able to dive into one’s own mind and comfort the disoriented little child that we have been. It is when one has put an end to her inner wars that one can lower the outer walls. The others can start circulating inside again.

Freedom is not a solipsism. It is an insemination of our desires in the world. But not rape! Gaia is tired of our unbridled assaults. We need to regain collectivism. Non-binarism blends in easily. Anti-binarism stands in its way.