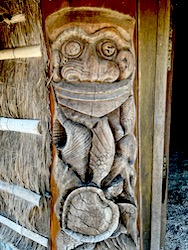 Before being bad in society, we are bad in our skin.
All social problems are dealt with in the wrong first direction, teleological. The real first is ontological: why am I unwell before being bad in what surrounds me?

There is a crowd on my identity path

Certainly my discomfort comes from what surrounded me. This past is social. But I represented it in my own way. This is what underpins my identity. No other is so intimate. Friends, advisors, essayists, judges, psychologists, networks, are foreign identities that seek to make their way into mine. I can find interesting elements in them, and especially flexible modes to structure my personality. But I have to achieve a result while keeping the impression of owning it: the identity I gave myself, not the one that an official or alternative guru wanted for me.

There is no result to speak of. Only a state on the path of identity. A path that is always open. Identity problems arise when it has closed. Within a particular group. Groupism quickly turns from support to cage for identity. The only group to which it remains necessary to belong? Humanity. And yet, some escape to experience themselves more broadly ‘animal’, to worry about other animals. A clue to what good groupism is: a set of social circles nested like Russian dolls and not rivals to each other. We are, indissolubly, companions, parents, friends, colleagues, citizens, humans, animals.

I participate in my insolvency

Encountering social problems is natural. Society, like all reality, is a conflict. Encountering intractable problems is not natural. It is mandatory that I participate in this insolvency. Although I have no power over the problem in question, it is in the way I represent it that the insolvency lies. I am a stage director.

In which social circle is the problem? Even if it is high located, in spheres where my power seems non-existent, these spheres are nested on other circles where I have power: my couple, my networks, my professional competence, my consumption. Since all these circles are entangled, how does my power transfer from one circle to another? I could see that I have some everywhere, including in the upper echelons. More significantly than in the form of a vote in tens of millions.

Damn this single vote is reductive! Or is it too generous, on the contrary? I can easily convince myself that many other votes are stupider than mine. But isn’t mine surpassed in relevance by others still more numerous? In this case my equal vote is a good deal. I realize that the reduction is actually a terribly crude approximation. The value of the vote is the same whether it is well-informed or not, weighed or not, selfish or collectivist, presentist or forecaster. But then is this “one citizen, one vote”, really an ethical ideal, or a sham resulting from the powerlessness to do otherwise?

What bloated administration could evaluate my skills more precisely? Who would want countless dry and impassive officials to come and look her in the eye, cling to the optic nerve, to hoist themselves up to the brain, and to wander through its convolutions by tapping on a notepad with a chagrined air? Exasperating! If I have to endure an investigation, I prefer to do it myself!

An original method could be inspired by the Balint groups, which improved the training of caregivers. To the intellectual part of medical care, based on science, the Balint group tried to integrate an empathic part, analyzing the difficulties of the doctor-patient relationship. Psychoanalyst Michael Balint called his project a “mutual investment company.” Officially this is not a therapy group for participants. But it is inevitable that they, in exploring their relationship to the patient, will investigate themselves a little more deeply than during their university training. The Balint group is thus the prototype of voluntary commitment to know oneself better in order to better practice one’s profession.

Are not community problems diseases of the great social body? Should their diagnosis be reserved for the disembodied coldness of sociology and political careerism? Or would it take an infusion of empathy to fluidify the hierarchy? Are our social circles stuck in each other, impossible to rotate, with a dictator to lock the whole thing down? Or are they mobile, permeable, transparent to our eyes? In other words: can you open the Russian doll and discover yourself, right in the center… Small but in the center, it’s a beautiful importance!

To examine oneself, to understand one’s malaise, to extend it – not to reduce it to a fantasy, an appearance, a pledge, an unattainable ideal – is the ontological / ascending direction of social treatment. As a social atom, I want to know why I want to form this molecule with others, and beyond which cell and which national organism. It is with this knowledge that I can then look at the proposed organizations. Politics and its tools, economy health culture etc, are retrocontrols of my desires. They strive to integrate them with those of others. Integration will necessarily modulate them. If I base my identity on the invincibility of my desire, I put myself on the banishment of society. If I base my identity on the complexity of my desire, and the variety of paths it can take, I integrate it more easily with others. I myself become its organizer. I naturally climb the hierarchy, because I have appropriated its paradigms.

A very different ascent, even opposed to, the teleological/top-down direction, which consists in placing an ideal at the top of the social organization and forcing all its atoms to live in such a way that the ideal is preserved. This mode is not the prerogative of the political theorist. Certainly Plato, Machiavelli, Marx, consolidated the authoritarian power of the Sicilian tyrants, the Medici and the Bolsheviks. But this top-down mode is also the one I use as an ordinary citizen, when I make my desire an unbeatable ideal, when I would like to be president instead of the president. I hope to exercise the personal tyranny of my desire over others, no matter how harmful or beneficial it may be.

The primary direction of my social look must be bottom-up. And this ontology I must bring up from the depths of my being, which can be a well-being or a malaise, regardless of my bank account or the brand of my shoes. The flow of empathy that rises from the depths of my being cannot be bought. These are shortcomings that prevent it from emerging. What kind are they? Which ones could I fill myself? What new spheres will I be able to reach? Some social circles will be accessible to me with intellectual rigour. It is also the intellect that makes it possible to model these circles and organize them as well as possible. But it’s the flow of empathy that will get me through them all.

I increase my real power by collectivizing it, not by egocentrizing.

3 thoughts on “What is the priority view of society?”