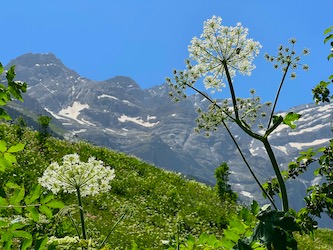 Two ways of seeing Nature: its own and ours. Among militant ecologists this way is an anthropomorphic idealism rather than Nature per se. Gaia is as much “Mother Nature” as the God with the big white beard sitting on His cloud is “Father of All Men”. And not so much women, by the way. These visions are religions of Nature and of the One God.

It is therefore not surprising that environmentalism has the appearance of a sect with narrow-minded ideas. The rest of society has not been mistaken and has never attached much importance to a militancy that declares itself vital, since it is a question of keeping our ecosystem hospitable.

Scientists themselves have hardly dubbed most of the militant struggles —I will explain at the end why. Their frank commitment is recent, on a subject that could not be more global: global warming, which threatens the entire ecosystem and no longer a few species that inhabit it.

Why this discrepancy between scientific and mystical ecologies? Don’t they have the same objective: the preservation of Nature? But precisely, what Nature are we talking about? Do scientists and ecologists symbolize the same thing in this term?

Certainly science is not foreign to a certain form of idealism. Its “fundamental laws” seem immutable ideals, of essence as divine as the intentions of a creator God. But science goes through revolutions, which upset these ideals when necessary. In this way it restores to the real the direction of its fundamental identity, instead of imposing on it a strongly anthropomorphic one, that of our desire, the desire of our generation moreover.

Nature photographed with an Instamatic

Because the icon of Mother Nature adored by ecologists is the one learned by a generation. It is the photograph of a moment of its very long life, stormy for millions of years. If ecologists had lived in the Mesozoic, they would have been outraged that a tyrannosaurus rex was killed because it devoured humans. Equivalent today: New Caledonian ecologists are protesting because sharks have been eliminated from the lagoon because they have devoured a bather and her dog. You have to keep the photography pure and intact. All species listed must remain there.

Nature, as it sees itself, or at least as science draws it by letting it hold the pencil, has nothing to do with this mysticism. It is a perpetual organization, from a few complex molecules formed on rock and in water, to the diversity of today’s ecosystem, which was even greater at certain times. Extreme diversity is not an ideal of Nature. It is only a state that it encounters in its explorations.

What would have been the ecological ideal at the dawn of the Earth? Militate against the soiling of the beautiful brilliance of the rock by mold. These early organisms proliferated, their corpses piled up, covering most of the emerged surfaces with a stinking humus. The planet has wrapped itself in a layer of rot. A gigantic garbage can! A mineral ‘Together For The Planet’ would have asked that we use the high-pressure hose… Then cover the continents with a nice layer of plastic to prevent the return of infection.

Today it is the mineral fumes that stink, the organic smells good. Another era, another ideal… all this is in humans and not in Nature. Not that human desire is to be excluded, of course. The ecologist imposture comes from being disguised as a desire for Nature per se and not clearly expressed: “I want Nature to be like this, stay that way”. Why not? Nevertheless social life is taking into account all desires, not only those making Nature their private garden.

Diversity… of our desires

Others live there. The peasant who clears the forest wants a field to feed herself. The city dweller who enters the supermarket wants to fill her shopping cart. The geek who is eyeing the latest technological marvel wants the means to afford it. The great social, economic, political, business organizations, mocked by ecologists, are only the organizations of our desires. If we abandoned these, if we no longer consumed anything, these organisms would lose all power.

Any power of nuisance, for an activist. All power of ease, for those who have nothing. Would these organizations only benefit the rich? Stupid. Above all, they are the only way for the poor to survive. Where the power of these organizations is weakest, people die more. But let us not deviate into the political field. Certainly ecology has close relations with politics. Ecological management, however, is only one aspect of social management. Its purpose remains limited to: how best to organize the ecosystem to satisfy the desires of the greatest number, without threatening its survival as a global entity.

Life is a unfolding, not a snapshot

I just talked about management. This is the human view of Nature. Nature is. Its being is changeable. Devoid of emotion, morality. It explores its possibilities. Immutable process that goes through stabilities. Species light up or go extinct. Diversity is increasing or impoverishing. Nature has no ideals about itself. Only humans have. What should they be? That of a human, a group of humans, the blind collective, a hierarchy of the collective where the best informed groups of humans occupy more important decision-making positions?

The militant ecology of past decades is sectarian groupism. Like congregations that choose scientific notions here and there to demonstrate the existence of God, ecologists have selected scientific interpretations to demonstrate their ideal of Nature. It is neither God nor Nature that is demonstrated in this way, only the idea that the militants have of it. A lot of data is eliminated; the image is shrunk, God and Nature narrowed. The insincerity of these representations, of what is supposed to be mysterious and inaccessible, makes them corpses pinned into a frame and in front of which activists exclaim: “Look how alive it is!” Nature, if it could speak, would certainly not recognize itself in such a snapshot, it which has taken so many faces…

Threats amplified by the sect

Sectarian ecology has long put off the majority of the population and scientists, criticizing social organization and thus isolating itself from its functioning. It has inhibited rather than promoted the spread of environmental memes. Blind proselytism has never been popular. It takes armed and violent groups to impose it. Violence is no stranger to this nasty aspect of ecology.

The sect’s reductionism is responsible for the current energy crisis and in part for the biggest nuclear threat in decades. This threat is far more critical than any existing plant explosion. Indeed, European dependence on Russian gas has been a major endorsement of Putin’s expansionist ideas. Certainly he would not have invaded Ukraine, if it was the neighbour of an energy-independent Europe, which has no reason to make soft eyes on an important supplier. Anti-nuclear militancy, based on the ideal of an Earth devoid of any radioactive waste, has put us on the threshold of a war that could make Gaia entirely radioactive!

How many teenagers watch wildlife documentaries?

Ouch, I fell back into politics. Very briefly. Of course, there were other ways of managing our energy and foreign policies. My purpose here is to show that it is stupid to campaign for an ideal independently of others. All the desires of humanity must be organized together. Gaia is not a divine entity. It is the emanation of our multifaceted desires about it. What is superior to us is the organization that we can design about it, which satisfies the greatest number.

This organization is indeed an autonomous entity that we can call Gaia if it pleases us, because it must keep a certain stability regardless of our particular desires. But Gaia has no predestined face. Dinosaurs would be horrified by this mammalian Earth. And our descendants will probably be horrified by the “return to Nature” that ecologists are advocating today. They are already there actually. Most young Kanaks who live in tribes, in a wonderfully preserved nature, only dream of going to the city…

The failure of the single look

The regulars of this blog will have understood that the failure of ecological activism is the failure of the single look. Here the unique look is the descendant, that of the ideal sanctuarized Gaia contemplating the ecosystem. The other look, the ascendant, used by science, reveals Nature as a process. Its progress always meets with stability in new contexts. Nature does not need us. Not good either to make it a unique look rival to the previous one.

Ecosystem management therefore requires to make coincide a double look. 1) The ascendant of science, which studies the natural process, devoid of purpose in itself and in particular morality. 2) The descendant of human intentions—survival, comfort, multiplication, civilization—which influences the course of Nature towards these goals.

In the center, hated by unique looks

Ecology in extenso is a conjunction of these two perspectives. I would not have wanted to be in the shoes of those scientists who were asked to choose: to belong to the militant sect or to be an opponent of it, because they did not want to give the desired interpretations.

Indeed, when you use the double look, about any bipolarized subject, each user of a radicalized look considers you as belonging to the other. Perhaps one day we “coinciders“, who manipulate the double approach, will be numerous enough to become co-decision-makers! And Gaia will be better off.