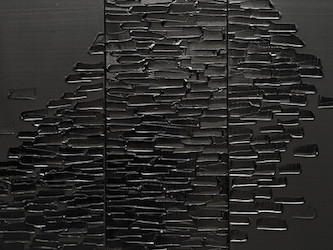 On the occasion of the death of Pierre Soulages, “researcher of the ultrablack”, Cédric Enjalbert praises “black romanticism”, this sensitivity that allows the shadow part in us to be expressed. He quotes Edmund Burke in his Philosophical Research on the Origin of Our Ideas of the Sublime and the Beautiful, in 1757:

This is the “delicious terror”. But is it really terror in itself that we taste with so much excitement or just the vividness of awakened emotion, after a long sleep in a life too predictable?

Contrast rather than darkness

Delight seems the satisfaction of a hungry need for contrast and not the attraction to terror per se. Do you live in a world of omnipresent colors? Enjoy black and white. Excessive realism? The abstract attracts you. Too many garish colors? Pastels seduce you. No satisfaction lasts without wearing. We are naturally programmed to get bored, to try something else.

You have to be terribly jaded to get to the point of finding the terror tasty. Take the advice of those who experience terror on a daily basis. The emotion triggers a more authentic reaction in them: they flee.

What deadly boredom has buried art dandies under its cloak so that they are forced to resort to repulsive emotions to cheer themselves up? Of course they tasted the worldly veneer and never the circumstances that would have triggered the extreme forms of these emotions. Contrast of evocation and not of experience. What would we have, the haves, be without our fantasies…

All humans greedily suckle the milk of contrast. Too white automatically makes you look for black. But there may be a deeper reason for the appeal of black: it conceals what was not born. At the same time everything can be born there. This is the place to protect unspeakable thoughts. Ridicule, madness, have the right to be cited. Nothing can really surprise in the harsh clarity of the light, because nothing is hidden. While everything can come out of the dark, and therefore everything can enter it.

Black is a nursery for thoughts that worry about being scrutinized too much.