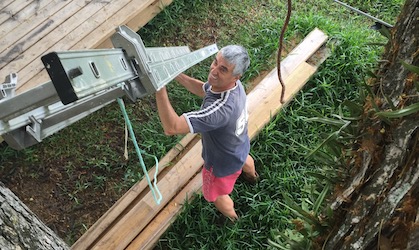 Exercising complete and unmediated power over one’s own life is the dream of every citizen. Ouch! The title of ‘citizen’ immediately curbs the dream. Others surround me, with their competing hopes. They must be reconciled. “Complete and unmediated” remain theoretical. Roughly the darker the color on the local population density map, the more transparent my power is, divided between all these people.

Choosing the life of a hermit? Many miles are still empty on this planet, but very few are comfortable and none have a supermarket nearby. The undeniable advantage of the city is the pooling of resources. Grouping leads to organization leads to hierarchy. And here is our power that seems to be in full… fainted, delegated to others.

Let us agree on the meaning of the delegation. Is it for the delegate to represent your opinion with the greatest possible fidelity? This mirror delegation is confined to well-defined cases. Delegated authority for a meeting that votes on resolutions. You are the principal and the intermediary a proxy, your perfect clone on this occasion.

Mirror delegation can continue on this basis. The role of the mandatary is to think like you, to make the choice you would have made. He has no authority to deviate an inch. No compromise has diminished your power.

Very different is consensus delegation. You give your voice to an elected official who engages your opinion in confrontation. It must be harmonized with the others. A battle task. Major advantage of the delegation: reduce the fight to words and a few people when it potentially concerns millions. This feature of the democratic process put an end to wars, first within nations, and then between them if all become democratic. But is the rule of the game respected?

Delegation-consensus is not a mirror of your opinion. You add your weight to those who share it and the total forms the power of the chosen one. If he is in the majority, the chances are excellent that your opinion will be the law. A minority, he is dismissed. More often he tilts the final project towards your opinion. Or weakens a project with a small majority that would not take it into account.

The Achilles heel of democracy

I push open doors. But this reminder is necessary to understand the major flaw of democracy: its extreme fragility when it does not find a solid consensus. Poorly monitored implementation of the project. Less authority of the decision-maker. When he negotiates with a politician of the same level, democratic disenchantment is a glaring handicap.

There is no shortage of examples in current events. The last: Putin, indifferent to the criticism of some of his constituents, mocks so much the majority opinion among Europeans, because their favorite sport is the denigration of their own heads of state. Putin is not dealing with representatives of his level but with suspended regional presidents.

Unstable, our presidents? This is inherent in universal suffrage, which subjects the highest symbol of the state to crowd movements. Old guardrails are disappearing. No more parties, no need for a political career to make oneself eligible. Soon the networks will be organized enough to preempt the candidates and eliminate any intermediate hierarchy between voters and president.

New freedom or coming debacle? We will have a “fashionable” president of current topics and influencers. Durations of careers close to singers: brief for the most part, sustainable for a few? As it is very difficult to please in politics, let us bet that the latter will be exceptions.

Encouraging example: Volodymyr Zelensky in Ukraine, actor turned savior. Another discouraging: Louis Mapou in New Caledonia, clientelist for a fraction of the population and without the slightest managerial experience. One pulls his country out of the debacle, the other drags him there.

The conservative hierarchy built on a rigid structure unbearably shields the power of voters. They no longer feel represented. But the dissolution of hierarchies turns the crowd into a mass of lemmings rushing into the precipice when they have chosen the wrong flute player. What other solutions?

There are two, intended to follow each other naturally with time. The first is to thoroughly recast the principle of hierarchy. Stop administrative feudalism, that system where every official is a baron in his castle, appointed for life, without accountability to anyone. Let’s privatize the administration! This consists, no more and no less, in making it work like the rest of society.

After history has concluded bluntly that Marxism is ineffective, it survives in all countries in this form: administration. The main reason: civil servants would be less corruptible, guaranteed to keep their jobs when they resist venal and egocentric pressures. The reason does not hold. The private sector has always been more efficient in meeting its objectives, whatever they may be. A liberal company is best placed to bring about collective fairness, if that is its market.

Poor performance will make it replace with another. Thus, we can hope for progress in the area of justice, instead of the slump in which it stands.

The paradox of a Trump

How can we motivate an administrator? By promising him a modest but guaranteed salary, a monotonous career and a peaceful retirement? Or by paying him according to his productivity, his ardor for the result, the learning that will make him climb the hierarchy?

Behind citizens’ disenchantment with their institutional parties and career politicians, behind their sudden attraction to billionaires, actors, influencers, hides a general feeling: the public bureaucracy is as inefficient and entrenched as a Soviet official. The only way to understand this paradox is that people are looking for more equality by entrusting the task to those who benefit most from inequality. The most important thing seems to awaken the dream rather than flatten it under the administrative steamroller, which devours in the process a huge part of its funding.

To privatize the administration is to get rid of the slimy aspect of the hierarchy, the one that makes its most off-putting image: a casemate full of technocracy worshippers, all clinging to their small piece of power. When you are forced to set foot there, you are not sure you will be able to get out of it for months of interrogation and imprisonment.

Delegating power to this institution does not give the impression of sending it to consensus but having it devoured by a hungry monster, which digests it for its own use and makes it a larger volume of waste. Very bad carbon footprint.

Would privatizing the public hierarchy be entirely a novelty? No, parts have been for a long time. Doctors, notaries, public services but liberal in essence, and subject to ethical orders. Excellent successes. Imagine that you can choose your tax inspector as your attending physician, that he has the same treatment to administer to you but that he does it in a way that better suits you? Certainly you would feel like you are keeping a little more power over your obole.

Ceding power so that it continues to exist

But saving our power is also recognizing our inequalities to exercise it. How can I claim to have knowledge because I have just read it on the internet? Have I also recovered what founds it? The experience that adapts it to a multitude of contexts? Isn’t it a little too dazzling, masking its uncertainties, its competitors less attractive but perhaps fairer?

More importantly: what is its impact on me, as an individual, and on the collective? Does the benefit to me add up to that of others, or are they upset about it? How will I use this knowledge, depending on whether I am a citizen or a representative of the collective?

The difficult independence of the office

A representative is also a citizen. In order to keep individual and collective interests independent, he is obliged to identify himself entirely with his responsibility. This is how society works today. Voters can remain entirely individuals, the elected representative should be fully representative of his office. Manichaeism easy to assume for the voter, who is accountable only to himself. More difficult for the elected, who slips frequently; its individual part whispers in the ear of the collective part: “Think of yourself, you do not get enough benefit from your office”.

General impression: countries where citizens keep a strong natural collectivist share have the least corrupt administrators, the least frustrated decision-makers. But the rigidity of public bureaucracy can be a game changer. In these services, it is the every man for himself who dominates. How could collectivism survive it?

This is why the success of collectivism cannot be traced back to a culture. The Scandinavians handle it more effectively than the Latins, but not just because they are more collectivist at heart. They better preserve their administration from economic oligarchies.

Recognize our skills inequalities. How else can we regain confidence in the delegation of power? How do you invest someone in a role if everyone simultaneously says, “I could do as well as you” ? We are not far from it, today, antivax telling epidemiologists how to manage a virus, amateurs dictating their diagnosis to the doctor, consumers pushing their overloaded carts and giving the order to save the ecosystem.

It is not a question of dissolving the hierarchy but of finally making it effective, representative of the interest of the greatest number, in which everyone can clearly find themselves, and not lose it behind particular interests.

Is there still any hope, however, of one day freeing oneself from this representativeness? Realize the dream we were talking about at the beginning. To be in control of one’s life, through a truly participatory democracy?

To preserve one’s power is to integrate it

Yes, it is possible, provided we integrate the collectivist hierarchy into all of us. It is no longer necessary to administer it externally when we own it. But it’s not giving it a makeover in our own way, as we do today. It is to host the same symbols, the same ideals. To mark our originality not in the perversion of concepts, but in the way they dialogue with our individuality.

Reaching this stage is not a matter of knowledge but of self-observation. A good part of the knowledge elite is affected by dwarfism when it comes to self-observation. Conversely, uneducated people observe themselves very well in their situation. The latter do less damage to the collective than the former. Much, much less. A society of people who recognize themselves in their incultures progresses more timidly but avoids absurd conflicts.

Between shyness and divinity

Such a society would not be threatening the planetary destiny. There are no worse blinders than in those who think they know. Will we be able to escape the excesses of self-satisfaction? Perhaps when we can expand our mental space at leisure, integrate all the means, all the experiences. But will we still be individuals if everyone can live these thousands of lives? Another nice debate in perspective for this blog 🙂