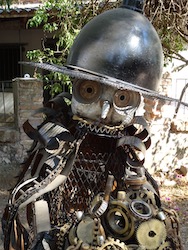 The art of the monkey

Prejudices are very powerful when it comes to AI, even among the researchers themselves. Antoine Henry says in Science&Vie: “[A machine] cannot be creative since it has no intention. It is ultimately just simulating art! “. The article comments on Botto, an AI that has just exceeded one million dollars in revenue with its graphic works.

Same reluctance with Serge Abiteboul in Pour la Science says: “The poems that our algorithms create are still mediocre. What we know how to do is give a machine plenty of examples of beautiful paintings, and ask it to produce a work in the same genre. It doesn’t really create, it apes. »

It is to forget that every artist apes reality. That he usually does it for a restricted bunch, amateurs of the deformation of the gaze used. Art splits into great influences. The “unclassifiable” is never quite unclassifiable. It must refer to existing concepts to be understandable. In case of success it gives birth to its own class. Even from “nothing”, which is still a concept.

Where is the audience of IAs?

The human produces for the human, the AI for its designer. The difference? The designer having programmed a more determined goal, he is less dazzled by the fantasy of his creature. Is this surprising? To see the birth and maturation of real AI artists, let’s start by creating the AI audience capable of electing a remarkable work because they agree on its originality.

Is Botto initiating this move? It is indeed a multiple AI, one part of which creates the visual and the other gauges it. But in the end it is a human audience that appreciates the work. Rather, Botto simulates the artist’s internal thought process: imagination at work and feedback control of the result. Inventor and Observer playing a game of table tennis. An AI audience presupposes greater independence from judges.

But is art ultimately that? A production that brings people together? Or the different interpretation by each of a work that lends itself to all these nuances? The poems of Abiteboul’s AIs are perhaps mediocre for an elitist literary milieu and very pretty for laymen, who will recognize themselves better.

Art is a power, not a logic. The human is not ready to abandon it for no reason. The human brain “sublimates” while the AI “apes”. Since the AI’s digital cage currently has thicker bars than the primate’s, why should we be surprised?

An AI has all the patience needed for Homeric enterprises. Its present limitation is therefore not in its ability to create an exceptional work. It is unable to marvel at its own work. Consciousness that comes from a higher level of observation, nourished by multiple ways of observing the world and oneself, emotional and rational, fused into a single mental space.

A self-observation that evolution has encouraged us to train, but that we have not yet proposed to our AIs. Because we are looking for new slaves, not additional competitors…

You might object that this article is quite reductive for art. It is voluntary. This point of view will perhaps one day be that of an artificiality more intelligent than us, and with a much more developed artistic sense.